Co-owning, Sully, and the Orr’s

We recently decided to Co-own Sully with an amazing family this last winter. We have been in town, right on a main street and there is a lot of traffic, and a lot of people who are scared of our dogs just from their size. So we decided that until we were living out of town we were going to try and cut back on the number of the dogs in our house. So after Sully’s last litter we sent her out to some close friends of ours and their place out side of town. 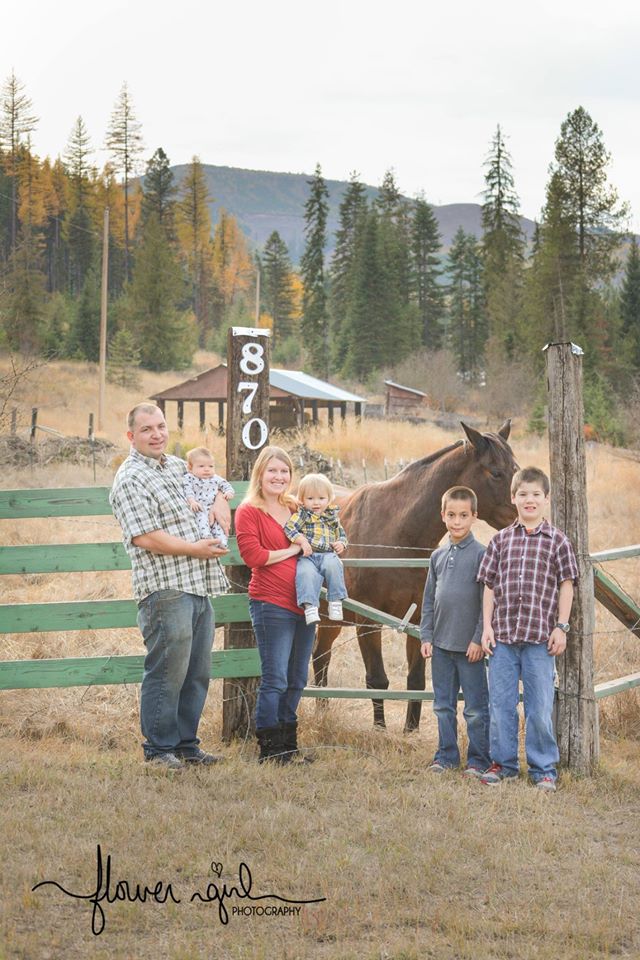 Meet the Orrs, Scott, Elijah, Mary, Levi, Joshua and Joseph(in picture order that is) When we first moved to the area I used to watch her two boys for her while she worked. I will never forget what she said the day I met her “But, we can’t be friends, see what happens is we find a great sitter. We become friends. Than when we want to do stuff we have no one to watch the kids because we want to spend time with you guys too.” I laughed. Now they are close friends and we wouldn’t have it any other way. They are an amazing family with a heart for everyone they meet. So when Mary was telling me they needed a large dog around their new place out of town, that would be good with the kids, and not afraid to chase off any animal that might wander in. I said I know just the breed, and just the dog 😉 .

After talking it over with Michael and her husband Scott we decided to give it a go. You would have thought we sent Sully on Vacation, she was in heaven out there.  She has animals to chase. Kids to play with and WAY LESS traffic. She has recovered amazingly from her last litter with the care of this amazing family and we appreciate them more than they will ever know. We couldn’t have picked a better second family (or are we the second family now?) for our amazing girl.

Sully is currently in heat and on the advice of our vet, she is being bred back. Thanks to the Orr’s, she is in shape, muscular, healthy and we are praying for a smooth pregnancy and delivery! If for any reason there is complications this will be Sully’s last litter! Don’t miss out on this litter, both parents have heart and personalities bigger then themselves!

Recently, we were offered an amazing opportunity to get out of town, and our little family, even the dogs, just love to be out hiking, exploring, and adventuring. We are very close to an amazing woman(Brenda Bittner) who has recently found she could use some help around her place. She has 20 acres on the top of a mountain, but still close to town. Between the views and the fresh air, there is yet to be a better place to relax and unwind.

This adventure has led us to a couple choices for housing. Brenda is in the process of putting in the rock pad, and hookups and we had to decide whether we buy a camper and live in it over the next two years, or build a cabin on skids that we could move if it was needed? After months of Pros/cons we finally decided the most financially wise decision we could make was to build our own cabin on skids. So let the planning begin. We are hoping to be in this summer, but North Idaho is determined to rain on our parade, and I mean literally.  The rain just has not stopped. We had grand ideas of getting started on the skids and floor before Michael started his new job, but today marks as his first day in the woods and no floor for us.

Which brings me to Michael’s new job. St. Maries lives and breathes on the timber industry in the area. For a small town there is 2 mills and MULTIPLE logging crews, log truck drivers, and anything that could possibly stem from logging. Michael has taken a position as a hooker for a local logging crew in the area and this morning was up at 4 getting ready for his day and it has been absolutely tipping it down (as he would say) since. This will be a whole new schedule for us as the last two years he has worked right through the middle of the day (9-6:30) and now will start coming home anywhere from 1-5 depending on the day and what part of the job they are on. That means more time with the family, and the ability to participate in sports, the ministry, and the kids in general.

We also have an awesome opportunity to lead a Mission to a local families home in Post Falls. Ralph and Sandra Moats have an amazing ministry that they have given up retirement and devoted their lives to. New Hope For Hope Adopted International Kids (NHFAIK) started back after they had adopted kids themselves from China, and were then be contacted abut kids within the U.S. that had been adopted internationally and than for personal reason been put back up for adoption within the states. These kids were being bounced from state to state and family to family with no one to advocate for them and make sure the legal procedures were being followed. Some were even being deported as paperwork was being lost in the mix of it all. Ralph and Sandra, have been touching so many lives of kids both in their homes, and in the area. Some people travelling great distances to seek help in their adoptions. I hope to write another blog in the Near future about this awesome opportunity we are putting together to help a deserving local family!
This next season of our life should definitely be an exciting one, with a new job, building a cabin, helping with Brenda’s Horses and land, as well as our ministry and all that it entails. Just another season of our whirlwind adventures stay tuned as we update on the dogs, the house, and so much more.

Sorry to be out of touch for so long. Life around here has been very hectic, to say in the least.
Where to even start. The house, my health, the dogs, our ministry…. This may become a series of blogs.

Chaos at the Pomeroy’s: Part 1.
A little bit of backstory to get you all up to date:

In November of 2015 we moved into the little brown house in town in hopes of flipping it and making enough that we could put a down payment on a piece of property.
We started off renting it as we did the repairs necessary to the home for it to qualify for a FHA Loan.  As we were starting the process we quickly found that there is a downside to there being way to many middle men.  As the home was being sold by owner from a local church they understandingly had to jump through a lot of hoops to get the approval they needed to move forward. Each step would take months to get through and longer if something needed changed.
In November of 2016 Michael was offered a position on a local logging crew and after a month of debating and pros/cons we accepted the job. We turned in a 3 month notice with NAPA and our last day was to be March 18th. We contacted the owners of the home and told them about our new deadline, as at that point we would no longer have previous employment for a loan. All of us were glad to have a deadline, and an end in sight no matter the outcome.

Well March 18th has come and gone and clearly God has different plans for us. About a month ago we were contacted by Brenda, the widow of the gentlemen Michael had moved out here to work for, and she was looking for some help on her property and was wondering if we would be interested in moving out that way. Brenda is a dear friend of mine, and the closest thing I had to family in the area after we moved here. We told her that we were waiting for the house to either go through or fall through before we could make a decision and not 3 days later the loan officer told us our processing would not even happen until March 17th.

As of the last few weeks we have decided that we are going to move out to her property and help her out and in turn hopefully save as much as we can to still be able to but our own place!

Individual Puppy Pictures are up on the site.

Finally found a moment to take a couple pictures of the new babies.

It’s really hard to tell how light or dark their colors will be until a few weeks down the road but the Apricot/Brindles make it easy to guess there main color, just not the shade of each puppy. Their unique coloring will change a lot over the next few weeks, so of course I do not expect anyone to pick their puppy now and in fact I don’t recommend it. However, If you want to give me a heads up on who you are thinking about or just want to talk about these beautiful babies, I am always up to it.

Feel free to look at the babies and ask any questions you may have. The three girls are still available.

P.S. stay tuned I would like to address Sully’s C-section and my thoughts on the ordeal later this week!

We are up and running!

Hello, from all of us here at Grace by Faith’s Mastiffs.
It has been a crazy couple weeks around here with the holidays and preparing for Sully’s puppies, but thank you all for being so patient. We have received many messages and email asking for our website and we are proud to say that it is finally here.
We would love to give a huge shout out to Michael’s dad, Richard, at CHVentures for putting this together for us. Richard has put in many hours trying to help us get this site up and running, plus trying to teach me how to run it! We would have never been able to do it on our own and your effort is so very appreciated by us. We love you guys!
Please feel free to look around. If you are on the site and see an error, something we are missing, or have ANY questions, throw us a message we would love your feedback.